True wireless headphones already exist. The wireless version also has many advantages. The cases of the devices usually have an integrated battery and therefore have decent runtimes. The compact dimensions also play a big role. The PaMu Scroll headphones from Padmate are also stylistically flawless. 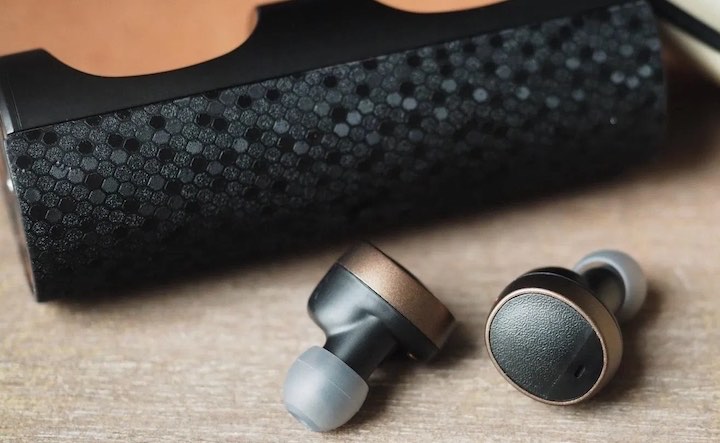 Padmate’s success story started with a crowdfunding campaign on Indiegogo. This literally went through the roof and became the most financed audio gear campaign on this platform. The optics certainly don’t play a minor role, because the headphones are a real highlight in the field and really exceptional. This feature clearly sets them apart from the competition, where the models are often very similar.

The charging case has a cylindrical shape and is opened by opening it over the entire side. The chic headphones are hidden underneath. The ability of Bluetooth 5 promises a higher transmission speed , with a greater range and powerful sound. The fit of the headphones is comfortable in both leisure and sport. The in-ear stabilizers in different sizes help with individual adjustment. The IPX6 water resistance also protects the headphone technology from light rain and sweat.

The headphones are charged via the charging case, which has a micro USB connection on the head side. If the earbuds are now removed from the charging case, they automatically switch to pairing mode so that they can be paired with the smartphone or another device. They are also dust-resistant and can therefore be easily carried on the off-road mountain bike slope. Both headphones have a touch surface and can be controlled without the smartphone.

The important thing with PaMu Scroll is simply the design. The unusual shape of the charging case and the headphones are a statement to the big brands. Padmate-tech was able to achieve a music playback time of three hours with the headphones. The charging case can charge both earbuds two more times . For a price of 79 euros, Padmate even plays in the middle price segment with PaMu Scroll. Absolutely appropriate for such a design object. Buy PaMu Scroll now from Moldac.